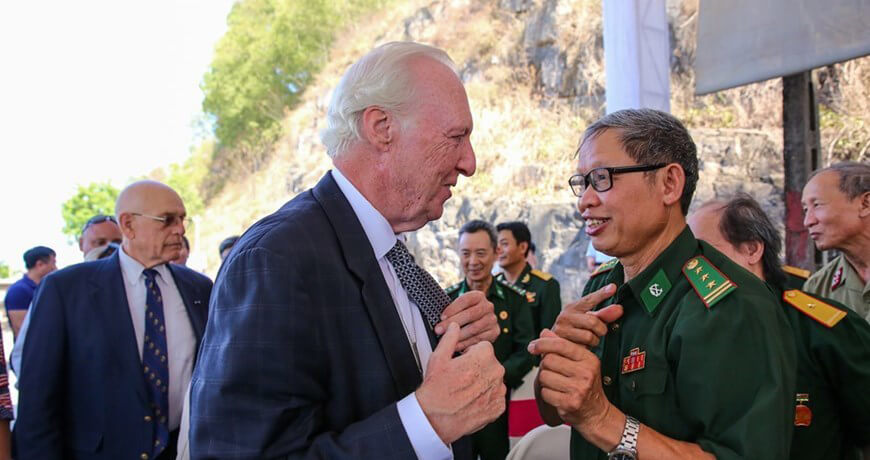 Veterans For Peace Chapter 160 members help celebrate a milestone for the U.S. and Vietnam’s 25th Anniversary of the normalization of relations.

On June 29, 2020 at Thanh Hoa, American and Vietnamese Veterans participated in several meaningful events commemorating the reformation and reconciliation efforts to heal the wounds of war.

Thanh Hoa, located south of Hanoi and north of the DMZ was a particularly interesting location for the 25th anniversary celebration because it is the site of the Ham Rong Bridge which was a major supply route transporting supplies from the north to the south. As such, this small 500 foot bridge was the target of heavy U.S. bombing, but despite being damaged several times, it was always restored. Ham Rong Bridge has become a national symbol of resilience and tenacity.

The day began with a cordial meeting with a group of about 12 Vietnamese Veterans, 4 U.S. veterans, namely; Matthew Keenan, David Clark with wife Ushi, Richard Brown with wife Tuan and Darrell Handbury. Also present were representatives from the U.S. Embassy, Colonel Thomas Sweeney and Major Charles S. Casey. The bilateral exchange while being serious in nature was cordially pleasant and concentrated on past successes of the mine action initiative Project RENEW, decontamination of Agent Orange sites, assistance to Agent Orange victims along with the continued efforts to work together as partners to make life better for the Vietnamese people. It is important to note, that the meeting was respectful and dignified with an appreciation for those who endured sacrifice. In fact, it felt more unilateral than bilateral especially with the mutual exchange of experiences and gifts of appreciation.

After having a delightful lunch with Ambassador Daniel Kritenbrink, Embassy staff, local officials and the VFP Chapter 160 group there was a tour of the Quang Trung kindergarten which was financed and built with U.S. Department of Defense Humanitarian Assistance Funds. The group visited each classroom of the school’s 300 students and was entertained by the kindergartners with a cheerful performance of song and dance. 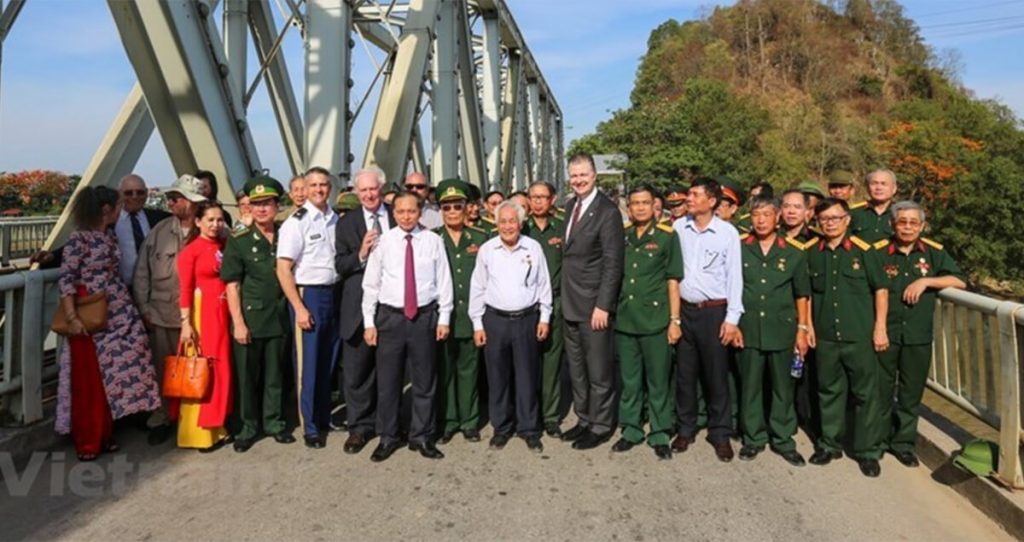 The highlight of the busy day was the gathering at the Ham Rong Bridge. As noted above, this bridge was part of a key supply route and the target of many bombing missions. Surprisingly, the VFP Chapter 160 group was travelling along with the Ambassador’s lead vehicle while being escorted by local police vehicles with sirens and lights glaring. VFP member, David Clark, in jest commented that it was the first time he experienced police cars ahead of him and not chasing him.

Upon arrival at the bridge, Ambassador Kritenbrink gave a short speech. Coincidently, as if applauding the 25th Anniversary celebration of partnership, a train robustly came rumbling across the bridge as Ambassador Kritenbrink was speaking. Everyone seemed to feel a sense poignant significance with the train’s appearance coinciding with the partnership activities. Then, hand in hand, arm in arm, Ambassador Kritenbrink, local leaders, Embassy staff, Veterans For Peace members along with Vietnamese Veterans slowly walked across the once heavily bombed but restored Ham Rong Bridge. In the intense heat everyone paused at the middle of the bridge where there was polite conversation, reflection and an exchange of gifts.

The day of celebration was joyfully concluded with a dinner party hosted by the local Thanh Hoa leadership. The 150 attendees were served with a variety of Vietnamese dishes while being entertained by a group of fine musicians and dancers. There were many elbow bending toasts between the mingling guests and the American contingent offered some mild entertainment with Matthew Keenan dancing with enchanting partners Ushi Clark and Tuan Brown followed by Ushi Clark loosening up the crowd with her singing some Vietnamese tunes. A highlight of the night was Ambassador Kritenbrink and Major Chuck Casey belting out the words of John Denver’s popular song Country Roads, Take Me Home to the Place I belong, West Virginia, Mountain Moma, Take me Home, Country Roads.

The total day from beginning to end demonstrated how two warring nations could overcome prior conflict with a genuine friendly spirit of partnership by talking, listening and trusting while using their brains instead of bombs.

Featured top photo: Veterans For Peace Ch. 160 members Matt Keenan (center) and David E. Clark (left) greet Nguyen Van Ton, one of those who participated in the battle to protect Ham Rong Bridge from the fierce destruction of US air troops more than 55 years ago (Photo: VNA) 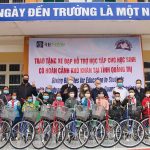 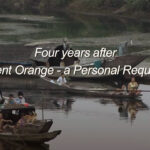 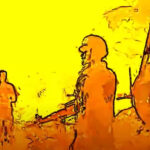